Processing Capacity:  Up to 350kgs per hour.  Has been seviced by two companies in VIC and by The Olive Centre. 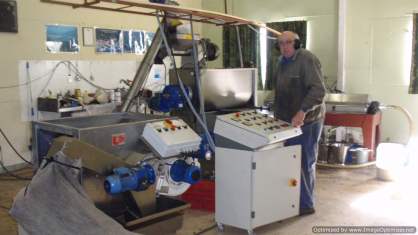 1997 the year I stepped into the Olive World in Australia. Since then I have had the privilege of working with many specialist researchers from all facets within the Industry from Australia and overseas. I am passionate about olives & our industry. I dedicate my work to enhance the production of groves (in all aspects of olives) through to commercial production. As founder of The Olive Centre, I wanted to be able to take out much of the guess work that growers in the earlier days faced in the trialling of equipment for the application of their use in Olives. This is the area I specialise in today in the Equipment, Machinery & Advice and provide a One-Stop-Shop to all Olive Growers. I have maintained a working relationship with well over 200 suppliers in order to bring the most up-to-date and cost effective equipment available today. All our equipment & machinery has been trialled in the commercial application of olives and through this our team at The Olive Centre hopes to ... help you achieve the maximum from your grove. Only through working together can we achieve a viable industry.